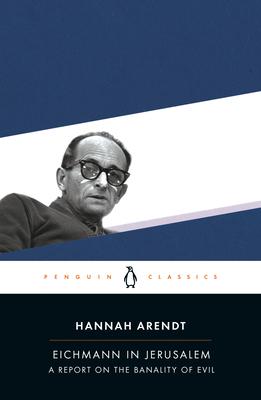 2006
5.00 Avg rating—1 Votes
The controversial journalistic analysis of the mentality that fostered the Holocaust

Originally appearing as a series of articles in The New Yorker, Hannah Arendt’s authoritative and stunning report on the trial of Nazi leader Adolf Eichmann sparked a flurry of debate upon its publication. This revised edition includes material that came to light after the trial, as well as Arendt’s postscript directly addressing the controversy that arose over her account. A major journalistic triumph by an intellectual of singular influence, Eichmann in Jerusalem is as shocking as it is informative—an unflinching look at one of the most unsettling (and unsettled) issues of the twentieth century that remains hotly debated to this day. This Penguin Classics edition includes an introduction by Amos Elan.

For more than sixty-five years, Penguin has been the leading publisher of classic literature in the English-speaking world. With more than 1,500 titles, Penguin Classics represents a global bookshelf of the best works throughout history and across genres and disciplines. Readers trust the series to provide authoritative texts enhanced by introductions and notes by distinguished scholars and contemporary authors, as well as up-to-date translations by award-winning translators.